Ayurveda is a holistic system of medicine from India that uses a constitutional model. Its aim is to provide guidance regarding food and lifestyle so that healthy people can stay healthy and individuals with health challenges can improve their health.

There are several aspects to Ayurveda that are quite unique:
1. Its recommendations will often be different for each person regarding food and lifestyle each one should follow in order to be completely healthy. This is due to its use of a constitutional model.
2. Everything in Ayurveda is validated by observation, inquiry, direct examination and knowledge derived from the ancient texts.
3. It understands that there are energetic forces that influence nature and human beings. These forces are called as Tridoshas.
4. Because Ayurveda sees a strong connection between the mind and the body, a huge amount of information is available regarding this relationship.

Kindly email personally well in advance to know about the schedules. We can always arrange a private one to one training if your arrival doesn’t fit or match with the official schedule as we have full time doctors, therapists and trainers. 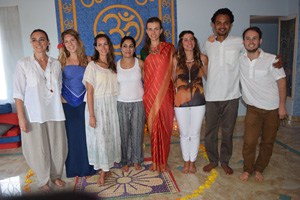 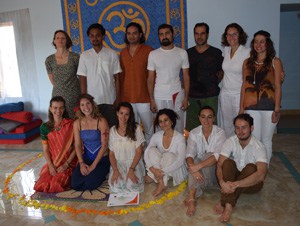 What and How – Ayurveda

Ayurveda is the natural healing system of India dating back to 3000 B.C. Initially, Ayurveda developed as the medical science of the Aryans settled mainly in the Indo-Gangetic region, but later, findings of physicians from other parts of India were also incorporated into it. In east and south India, Ayurveda developed with the same basic principles but with a focus on local flora, and on physiotherapy. Progress in gemology and metallurgy had its effect on medicine also. For boosting the effects of herbal preparations, a large number of minerals, particularly mercury, with a miraculous power against microbes, became an integral part of Ayurvedic. During all these stages, Ayurveda covered all aspects of human life. The aim was not only to make a man healthy but happy too. It did not deal with man and medicine only, but with a way of life, which included social, moral, and religious education, based on very intricate philosophies of Indian sages.

Ayurveda is also a system of medicine in the sense that systemized and applies the knowledge about health and diseases (i.e)of balanced and unbalanced states of living beings and how unbalanced states can be corrected, restored and balance is maintained. Ayurveda embraces all aspects of well being of living creatures- physically, mentally and spiritually. According to Ayurveda, health is not merely a state of freedom from ailments or diseases, but rather a state of enjoying uninterrupted physical, mental and spiritual happiness and fulfillment.

These learned men postulated many theories. They gave their views about the origin of the universe, the composition of matter, and the actions and interactions in our environment, which disturb the systems of our bodies and gives rise to many diseases and discomforts. Ayurveda combined philosophy with science, so the life processes, which cannot be understood by wisdom (budhi) have been explained on the basis of reasoning (yukti).

It was postulated that human health is related to constitution of body, age, sex, geographical region, race, ancestry, and resistance power or immunity. Good health is something more than the absence of diseases or infirmity. It is a state of complete mental, physical and social well being. As per Ayurvedic theories, the approach to health is holistic, with less emphasis on symptomatic relief. Treatment does not mean healing the affected part or a particular system, but the whole body. The treatment aims at correcting the site of origin of disease, the channels of accumulation and the site of manifestation of body poisons. For example, when there is a breathing problem, in the conventional system antispasmodics and bronchodilators are prescribed but in Ayurveda polyherbal preparations are given, in which some of the ingredients may have an antispasmodic effect but some others act on the stomach and intestine, from where the disease might have originated. This diagnosis is based on tridosha, the three biological factors in the human systems, around which Ayurvedic physiology, pathology and therapeutics revolve. In broad terms tridosha represents metabolic disturbances, and various treatments are given to keep the three doshas in order. Balancing of the doshas is required for a good old age and also for the day-to-day activities of modern life. It has been stressed that medicaments, particularly Rasayana, work only if the conditions within the body are conducive for their effect. During treatment, due importance has also been given to the mind, which is a powerful agent in causation and cure of diseases. Emotions, anger and pride are also treated as diseases. These affect the health, happiness and longevity of an individual. Recent studies also confirm these observations. We all know that negative emotions like greed, ego, anger and too much materialistic attachment lead to high blood pressure, aggravation of angina and heart attack.

Over-nutrition is excessive intake of calories, saturated fats of animal origin, sugar and lack of complex carbohydrates from tubers. The diseases affecting longevity are hypertension, brain stroke, cancer, diabetes, obesity, cirrhosis and other hepatic disorders, alcoholism, cardiomyopathy, and AIDS etc. The ancient Indian physicians were aware of these, and most of the herbs prescribed as Rasayana treated one or more of the above diseases.

Panchakarma is a unique experience that leaves the mind and body feeling relaxed and rejuvenated. Many illnesses result from the build-up of toxins in the body that can impair the functioning of its natural defenses, such as the lymph, circulatory, and immune systems. Panchakarma promotes healing and restoration by eliminating these toxins from the body. However, unlike other detoxification programs, panchakarma is a gentle process that achieves deep cleansing without discomfort, allowing the rejuvenating energies of the body to flow freely. The efficacy of any Ayurvedic treatment increases manifold if panchakarma is done before starting any remedial measures (Shamana Chikitsa)

Are you Vata, Pitta or Kapha? 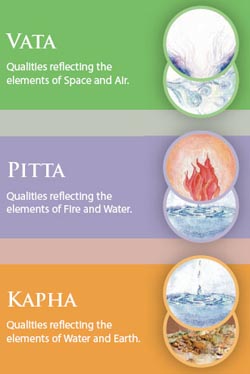 “Prakriti” is your basic constitution. It is determined at the moment of conception and relates to your genetically inherited physical and emotional qualities.

Prakriti specifically relates to those qualities, characteristics and tendencies that are stable. For instance, while you may experience temporary changes, like gaining or losing ten pounds, feeling nervous or irritable, developing a cold or flu, etc., in the natural course of life you will never gain or lose five inches on your height or experience a change of eye color.

We do your body constitution analysis on the basis of the Pulse and detailed questionnaire covering past history and present symptoms related to body doshas. Once your body constitution type is identified then we suggest you treatments, diet plan, medicines for general well being and treating specific diseases or conditions through Ayurvedic massages and therapies.